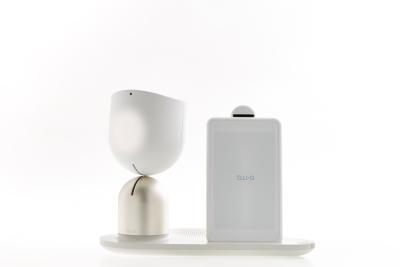 Intuition Robotics is developing an artificial intelligence-based robot companion to help older adults use technology to stay connected with family and friends and to live a more active lifestyle.

With a stylish dome body and a separate detachable screen, ELLI•Q  doesn’t look like a traditional robot. The key purpose of ELLI•Q is to act as an easy interface to access social media, messaging programs, and audio and video streaming. For example, the device could alert the user that their grandchild has posted a new photo on Facebook, show it to them on the screen, and allow them to comment using speech-to-text technology.

Unlike most other home assistants, ELLI•Q can recommend activities of its own accord. It might ask if you’re interested in watching a video, for instance, or after long period of watching television, suggest a walk. It can also act as reminder to take medication and has the ability to monitor wellness and the environment in the home.

“Our goal is to leverage a combination of our proprietary technology, emotive interaction models and gerontology insights with elegant design to empower older adults to intuitively interact with technology and easily connect with content and loved ones, and pursue an active lifestyle,” says Dor Skuler, CEO and Founder of Intuition Robotics. “We like to think of her as part communication coordinator, part facilitator of lifelong learning and part coach. She’s easy to talk to, intuitive to operate and understands her owner.”

Using “Natural Communication” such as body language that conveys emotion, speech interface, sounds, lights and images to express herself, ELLI•Q uses machine learning to learn the preferences, behavior and personality of her owner, and proactively recommends activities based on that history and recommendations by family.

According to Age UK, nearly half of all people aged 75 and over live alone and more than 1 million say they always or often feel lonely (Age UK, July 2014). Thirty-six percent speak to less than one person a day and 11% say they spent five days or more a month without seeing anyone.

“The idea of having a robot companion is quite dystopian, especially for older generations. Through years of research, we were able to develop a design language and user experience that feels natural, with subtle expressions to develop a unique bond between ELLI•Q and its owner. ELLI•Q could never replace human interaction, but it can be an important motivating factor in keeping older adults healthy and active when living alone,” says Yves Béhar, CEO and Chief Designer at Fuseproject.

Intuition Robotics, a startup pioneering social companion technologies, will be starting a trial phase in the homes of older adults in the Bay Area, February 2017.