How to Get and Use Emoji 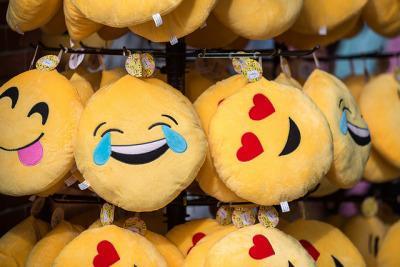 Picture characters on your keyboard

According to Unicode, "Emoji are pictographs (pictorial symbols) that are typically presented in a colorful form and used inline in text. They represent things such as faces, weather, vehicles and buildings, food and drink, animals and plants, or icons that represent emotions, feelings, or activities." Unicode is the organization that manages the development and support for emoji. It's an intense process for new emojis to be added which includes input from an exclusive committee of executives from Apple, Google, Facebook and other technology giants. Originating in Japan in the late ‘90s, emoji literally means “picture character” in Japanese. Shigetaka Kurita developed emoji while working to launch the world's first mobile Internet platform. There are eight official categories of emoji:

Emoji is a fast developing language and a fun and easy way to add interest and entertainment to online communication. Emojis can be used to clarify or add feelings to a message by using different facial expressions or gestures. People use emoji by inserting them in place of words and enhancing the text with related pictures. They are even used to tell stories. Some can be quite elaborate like this one of Les Miserables. 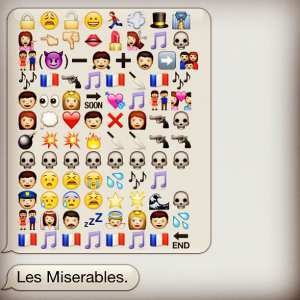 Get emoji on your mobile device or computer

You need to use an emoji keyboard to insert the pictures into your text. An emoji keyboard is built into iOS, Android, OS X, Windows and Windows Phones. For an iPhone or iPad go to Settings > General > Keyboards > Keyboards > Add New Keyboard. Next, scroll down and select Emoji keyboard. Once you have enabled it you will see a smiley face on your keyboard. Tap it and the emoji keyboard appears, tap it again to get back to your normal keyboard. There are many detailed tutorials on how to enable and access an emoji keyboard on various mobile devices and computers so I don't see any reason to spend time on it myself. I recommend you go to getemoji.com where they provide step-by-step instructions - select your operating system (iOS, Android, Windows Phone, Blackberry, Mac, Windows, Chromebook) from the menu at the top or from these links provided.